YEAR 2022 WISHING THAT MY EFFORTS TO FIND JUSTICE WILL SUCCEED.

MORE MEDIATORS! JUSTICE FLEES FROM ME AND LISTENS TO THE CORRUPTION OF MY LANDLADY. THEY ARE CORNERING ME TO THE POINT OF LOSING MY MIND! I ONLY HOPE THAT MY DEATH DOES NOT COME TO ME FIRST THAN JUSTICE. January 11, 2022 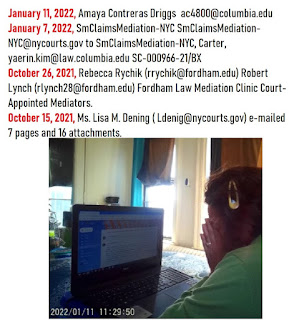 I BEGIN THE YEAR 2022 DEFENDING MY REASONS FOR BRINGING TO JUSTICE THE CORRUPTION OF WHICH I HAVE BEEN A VICTIM BY MY FORMER LANDLADY ROSA CATANO.  IN 2021 MS. CATANO MADE ANOTHER LAWSUIT IN A CIVIL COURT FOR $9,600.00 AND THIS TOOK THE CASE TO A TEAM OF MEDIATORS.  OCTOBER 15, 2021, OCTOBER 26, 2021, AND JANUARY 7, 2022, I RESPONDED TO EMAILS FROM FOUR MEDIATORS INFORMING MY REASONS FOR NOT ACCEPTING A MEDIATION. I WILL DO EVERYTHING POSSIBLE TO BRING MY CASE BEFORE A JUDGE BECAUSE I CONSIDER MS. CATANO DOESN’T DESERVE ANY MONEY FOR BEEN CORRUPT AND DISHONEST PERSON.

Once again, I want to inform the NY Small Claims Court mediation that the case that Ms. Rosa Catano has filed is already awaiting in Housing Court because this is for rent of a room that Ms. Catano claims. In addition, I have already responded to three mediators confirming that I want to bring before a judge the corruption and criminal actions of which I have been a victim by Ms. Catano and her family. Currently with the men she left in the apartment after she moved out.On October 15, 2021 I emailed to Ms. Lisa M. Dening ( Ldenig@nycourts.gov) a letter of 7 pages and 16 attachments. Also on October 26, 2021, I e-mailed to Rebecca Rychik (rrychik@fordham.edu) Robert Lynch (rlynch28@fordham.edu) Fordham Law Mediation Clinic Court-Appointed Mediators.  As follow you will find some facts of this case.

On October 17, 2019, the super of the building at 2665 Grand Concourse Bronx, New York 10468. through corrupt actions brought me to his friend Ms. Rosa Catano (aka Caba) to rent one of her rooms in her apartment 3 H. She had remodeled the living room by making two rooms and blocking the fire escape window. Her cousins Clara, Ivan, and I would pay her rent. All of us moved into the apartment in the same month of October 2019.

On November 16, 2019, I was sexually assaulted by Ivan, the next day I informed Ms. Catano. In one of the visits of Mr. Raul Caba, Ms. Catano’s ex-husband to his son, told him what Ivan did to me.  Ms. Catano became enraged with me for revealing her cousin's actions and resorted to fraudulent and criminal actions to throw me out of the house and cover her cousin sexual assault. She protected him from any legal action because of his undocumented emigrant status. However, on January 31, 2020, she confronted Ivan with me and admitted that he had attacked me sexually. Ms Catano believed in me and admitted he did it.

I went to the police station, and they suggested that I go to court and file a complaint. I went to the Bronx Court to seek help, but my efforts to find justice were unsuccessful. They sent me to several offices, and no one could help me. At the Office of the District Attorneys Bronx County, I had the opportunity to speak with Ms. Grace Phillips Assistant District for child abuse and sex crimes. Ms. Phillips kept a letter with my complaint and some pictures. The pandemic started and I lost contact with Ms. Phillips.

Ivan's sexual harassment continued. He walked through my door half-naked just with a towel covering his intimate parts and sometimes it was about to fall down. He waited for the moment I was alone in the kitchen washing my dishes to approach me and push me into the sink. His shorts were almost in the middle of his buttocks, and it was obvious that he was not wearing underpants.

On February 25,2020, Ms. Catano and her cousin Clara Senra knocked on my door. Ms. Catano wanted to know my full name to fill out a document saying that the court had given her to file a lawsuit against me. Ms. Catano complained that her 13-year-old son was afraid because I was going to kill him and her. Clara threatened to hit me. Mr. Caba didn’t believe his son had those feelings; I have been generous to the kid. He told me Ms. Catano was using her son as an excuse to throw me out the house.

On February 29, 2020, Ms. Catano began using letters and people stating they were coming from the court to harass me with eviction, even though I had paid the month and had no rent in arrears. We made a verbal agreement that I would wait for court day and the judge's order to vacate the room

On August 24, 2020, Ms. Catano brought a sofa to block the exit to the apartment and the kitchen, leaving less than a foot to pass. I tripped over the couch breaking a glass jug with water and hurt my knee.  Ms. Catano chose to stay in her room talking on the phone instead of helping me. I was in bed for a week in a lot of pain, I didn’t go to the hospital, my medical insurance expired.

The family used the smoke detector alarm to harass me. They burn food to trigger the smoke alarm. The noise, the smoke, walking in the dark and knowing that there was no way to escape terrified me. The fire escape ladder was blocked with a wall and door with a key. August 28, 2020, I was in bed with my knee in pain due to the sofa’s fall Ms. Catano triggered the fire alarm. I had to run out of my room amid the darkness and smoke and as soon as she saw me screamed at me saying: We’re burning! we’re burning! Ms. Catano removed the lamp from the ceiling leaving the hallway dark and without a way to have a light bulb.

September 8, 2020, at 4 p.m. someone abruptly knocked on my door twice shouting at me that it was from the Bronx Civil Court. An unfriendly woman with an unpleasant attitude came to my door alone to give me 2 copies of a letter. I asked her when the court date was, and she told me I was going to be notified.

On October 1, 2020, The Fire Department removed the wall and the door that were blocking the access to the window of the fire escape. I was blamed for it, the coexistence became worse, we had police’s visits. Ms. Catano had to use shower curtains in the living room to continue having a room for her and her son.

The cousins moved out without me noticing. On August 10, 2021, in a strange way a man named Martin appeared next to the door of my room in the middle of the darkness. He informed me that he is Ms. Catano's brother would move into Ivan’s room which is next to mine. Ms. Catano has no brothers in the US. According to her, she left her country using her ex-husband to obtain a residence in the United States.

The supposed brother never moved, but in return two African American men began to move in the room. On August 22, 2021, on a rainy night and in a state of emergency due to Hurricane Henri, they moved things to the room. It had a strong musty smell and looked like they had come from a basement. The men were dry, as well as things. They continued the move for several days. They made calls out loud using loudspeakers so I could hear them reporting to Martin. They always talk in English and Mrs. Catano speaks only Spanish. However, she escorted them when they were near me to talk on the phone with Martin.

On September 17, 2021, the living room was rented to a man. That night I heard him crying and screaming loudly. His mother was with him, and she told me that her son had an anxiety attack. He was on the floor, and I went to help him, he refused to go to a hospital. One hour later I was surprised when he appeared in the kitchen to scare me just like the landlady’s cousin used to do it.

September 22, 2021, Ms. Rosa Catano moved out of the apartment without giving me any notice although she told me that was taking the benefit of the eviction moratorium. She maintained a lot of cunning to hide her intentions to leave me alone with unknown men. On the same day of her moving, the new tenant # 3 another man was renting her room. On December 3, 2021, his girlfriend sprayed on me when she was trying to eliminate the smell of marijuana.

I've been afraid to leave my room when I hear doors banging, the hallway there is still without a lamp. I can't identify who is coming in and out or how many people live in each room. Ms. Catano locked with a key the extra bathroom that the apartment has to force me to share the bathroom located next to my room with unknown men. These men are assigned to harass me, and they stay home day and night smoking marijuana and listening to music in high volume. I have documented this situation of terror left by Ms. Catano to federal and state agencies. On September 15, 2021, two NYPD officers came to my room and were informed of the situation that Ms. Catano had put me through.

As the apartment has no ventilation, I can smell the marijuana worsening my medical condition. I am 66 years; I am still slowly recovering from the long-term effects that Covid 19 left me in December 2020. I often feel shortness of breath and fatigue. Recently I have been in the hospital for unspecific skin’s eruptions. I don’t have anywhere to live; due to the pandemic my living income was cut off and it is difficult for me now to qualify for a studio-apartment.

Ms. Catano wants to deceive the Civil Court of Small Claims, with a lawsuit that she already filed against me in February 2020 at the Housing Court, and I have responded. Due to the eviction moratorium, the case has not been in process, but I am waiting for the two pending lawsuits that Ms. Catano has filed against me. One she is accusing me that I am going to kill her and her son, and the other is eviction. I thank you for your interest in having a mediation. . I have evidence that can prove the veracity of my testimony. Again, I appreciate your attention and will look forward to the day my case is heard by a judge or jury. Sincerely, 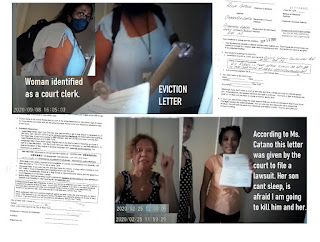 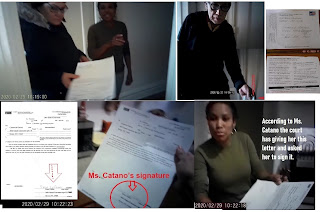 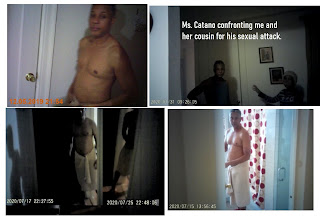 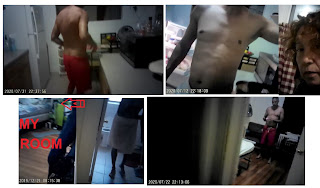 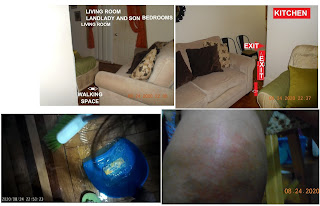 Posted by bankofamericaprotest at 8:53 PM