FLORIDA… “FOUR YEARS OF A LIVING HELL AT BANK OF AMERICA”.

Due to my divorce I moved to Florida. On February 02, 2004 I began working for Bank of America Washington Park Office in Hollywood, Florida as 20 hours part time teller.  As per the needs of the bank I worked as a full time teller without the benefits of the position. Unfortunately, I was hired at an office which was going through a crisis due to management’ abuse. The assistant manager ruled the office without any professional ethics with the purpose of intimidate the team work. This lady abused the employees, treating them disrespectfully, cheating their time-sheet  making their life impossible until they give up their work.

The Manager was new and had no experience in banks; he relied on his assistant taking always her side. When I asked him for help to obtain a full-time position, he suggested me to find a waiter position in a restaurant where I could make more money. Then he told me that what I needed was a man that would satisfy my needs and directed me to a divorce club that his church has.

Later on, the unfair and appalling situations that I was experiencing obligated me to look for a transfer to another office. It was a nightmare. I wrote many letters to the bank’s recruits asking for help but it were unsuccessful. By my own I found an office very close to my house, but by a weird coincidence could not stay there.  A new supervisor was hired. After being a victim of harassment, hate, unfair acts I found out that this woman had covered the position I left in New Jersey. She was offended when customers said they missed me. One of my co-workers in NJ told me that this woman always complained when she hear positive comments about me. She wanted to vacate the desk I was seating. Unfortunately she also moved to Florida, and by a twist of fate we came to the same office. It gives her the opportunity to take revenge on me.

I had to try hard to be a successful employee. Because everything was posted   through the computer and the tickets went directly to the central office, managers could not prevent an employee not being recognized. I participated at the Central Broward Recognition Event for which I was named the new Ambassador of the bank for going above and beyond referring customers for new accounts.  I won a contest for being a Professional Teller $500.00 cash value, gift cards and certificates.

On August 15, 2005 I started working at Cooper City as Senior Teller with Supervisory Authority. . I continue to receive recognition,  bonuses, certificates, incentives, from the bank. On July, 2006 I verbally informed the Assistance Manager my decision to return back to New Jersey.

On August 09, 2006, on my lunch time from work, I went to Publix Supermarket located at the same shopping center as the bank. Being in the cash register I slip and fell. The assistant manager came and called an ambulance, I hurt my knee, ankle and back. Next day she asked me to come to work as soon as possible. I was the closing employee and the bank needed me. I was given four days for recovery.

Experiencing pain and using back supports I returned to work. The assistant manager put lot pressure on me to prevent I build a legal case. She advised me not to think about suing the Publix supermarket; they had strong relationship with the Bank according to her as employee of the Bank would give a negative image to the business. When I left the hospital, a coworker had recommended me her lawyer; who came to my house to take the case. I was intimidated by the working hours designated by the assistant manager. She does not give time to go to therapy.  I could have only one month of treatment, having pain I had to meet the schedule.

Eventually, I started receiving correspondence from my medical insurance claiming that they were unable to pay any medical bills since this was an accident, not a medical condition. The assistant manager tried to call the supermarket to ask them for payments of medical bills but it was not successful. Later on, by mistake the attorney had sent a letter of wage and salary verification directly to my place of work instead to Human Resource. This caused a hectic situation with the assistant manager that was unaware of me having contacted an attorney. She took it upon herself to fill it out stating that I had taken 2 days of illness and two vacations. This jeopardized my claim with the lawyer and the case was closed. I was afraid she sends any negative comments to New Jersey.

The work environment had changed significantly. My supervisor was the assistant manager’s spy. My cash balancing was accurate until December 01, 2006 when cash disappear from a transfer with my supervisor.I was very aware of this loss and asked for view cameras and do some research. I didn't have any support from my bosses, they ignored my request. All my efforts to get the security involved to recover the shortage were useless. A new Manager arrived at the office and he gave me relief.  He told me not to worry by the incident since this would not come out of his Office. 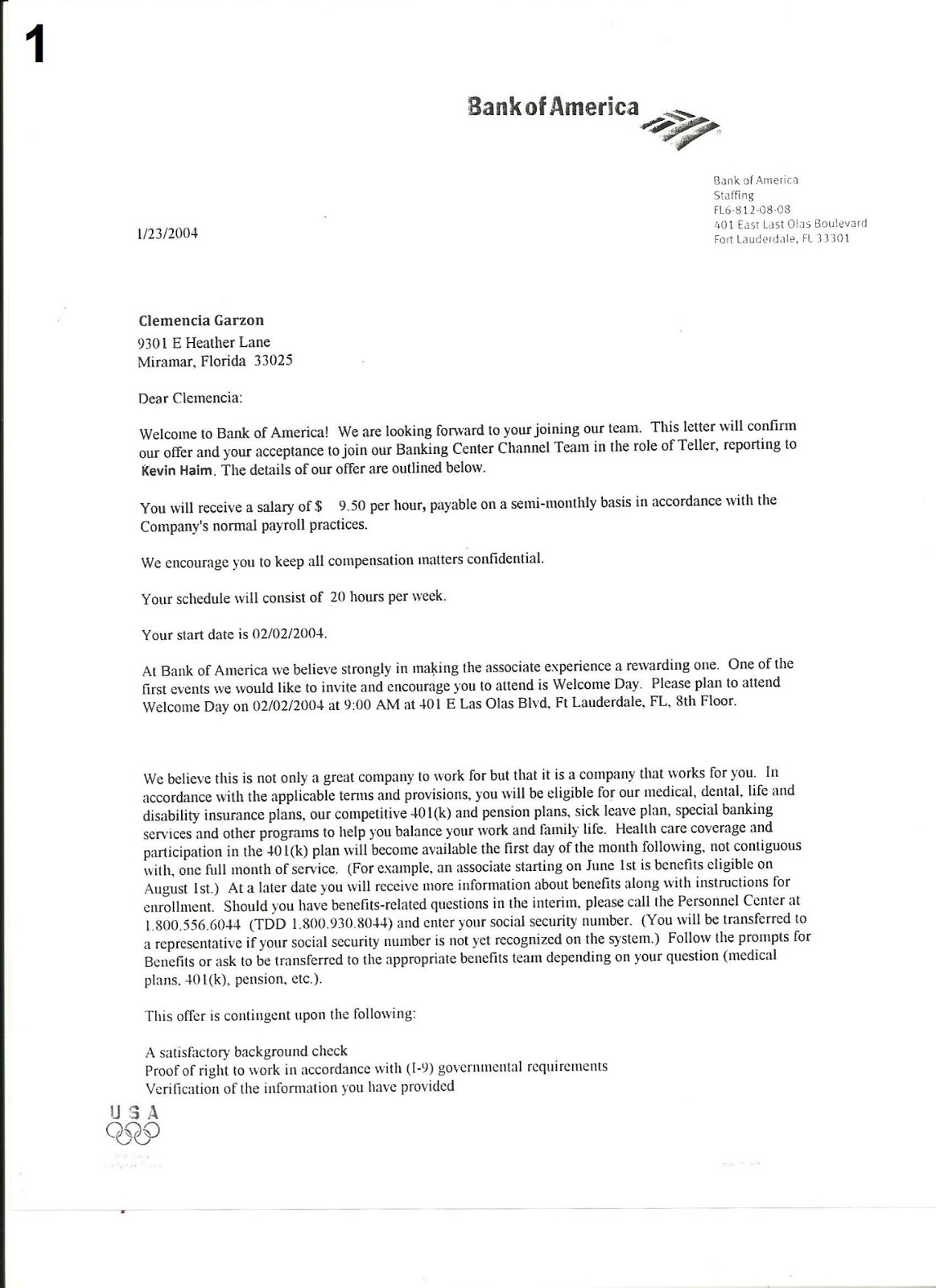 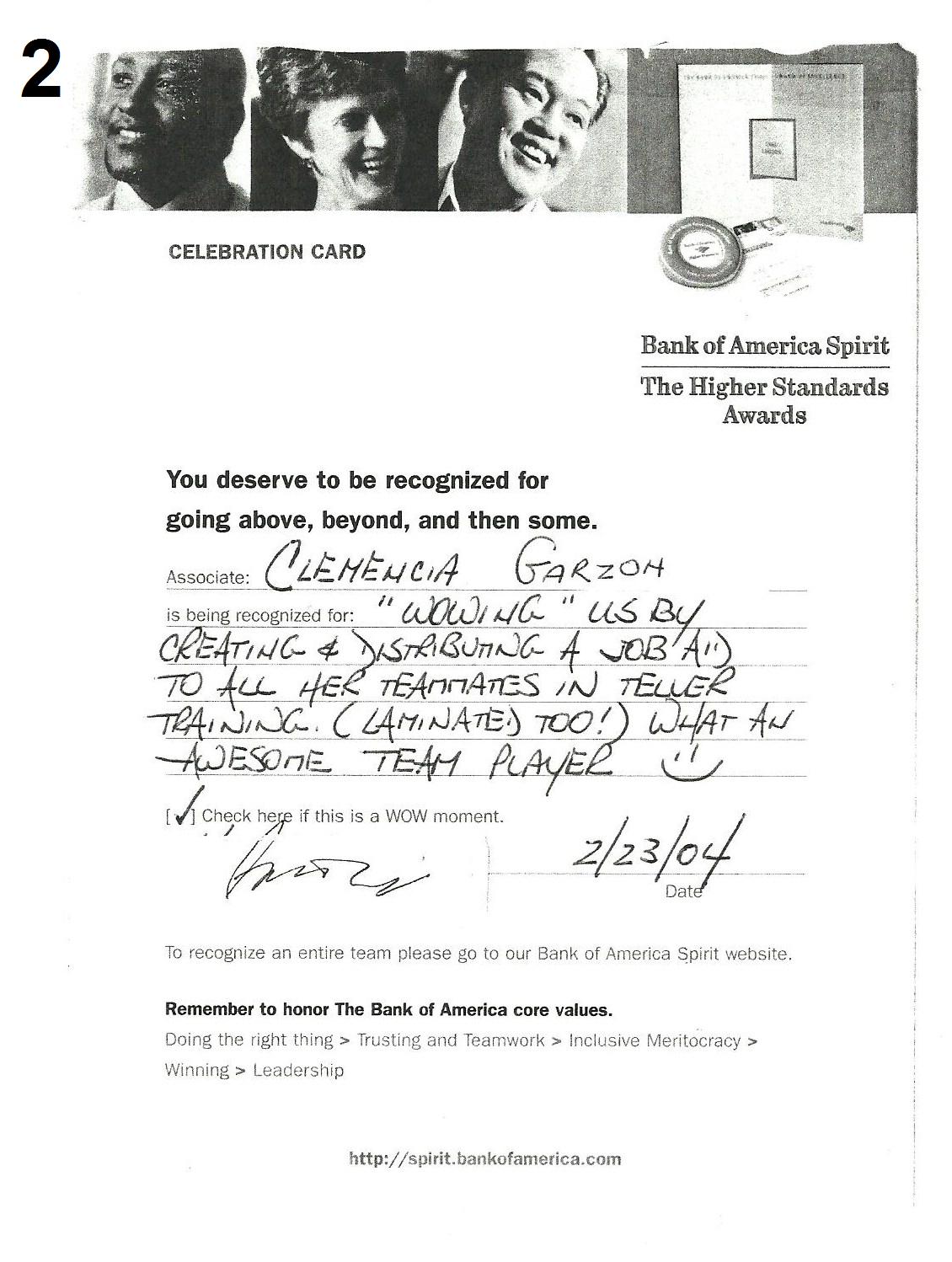 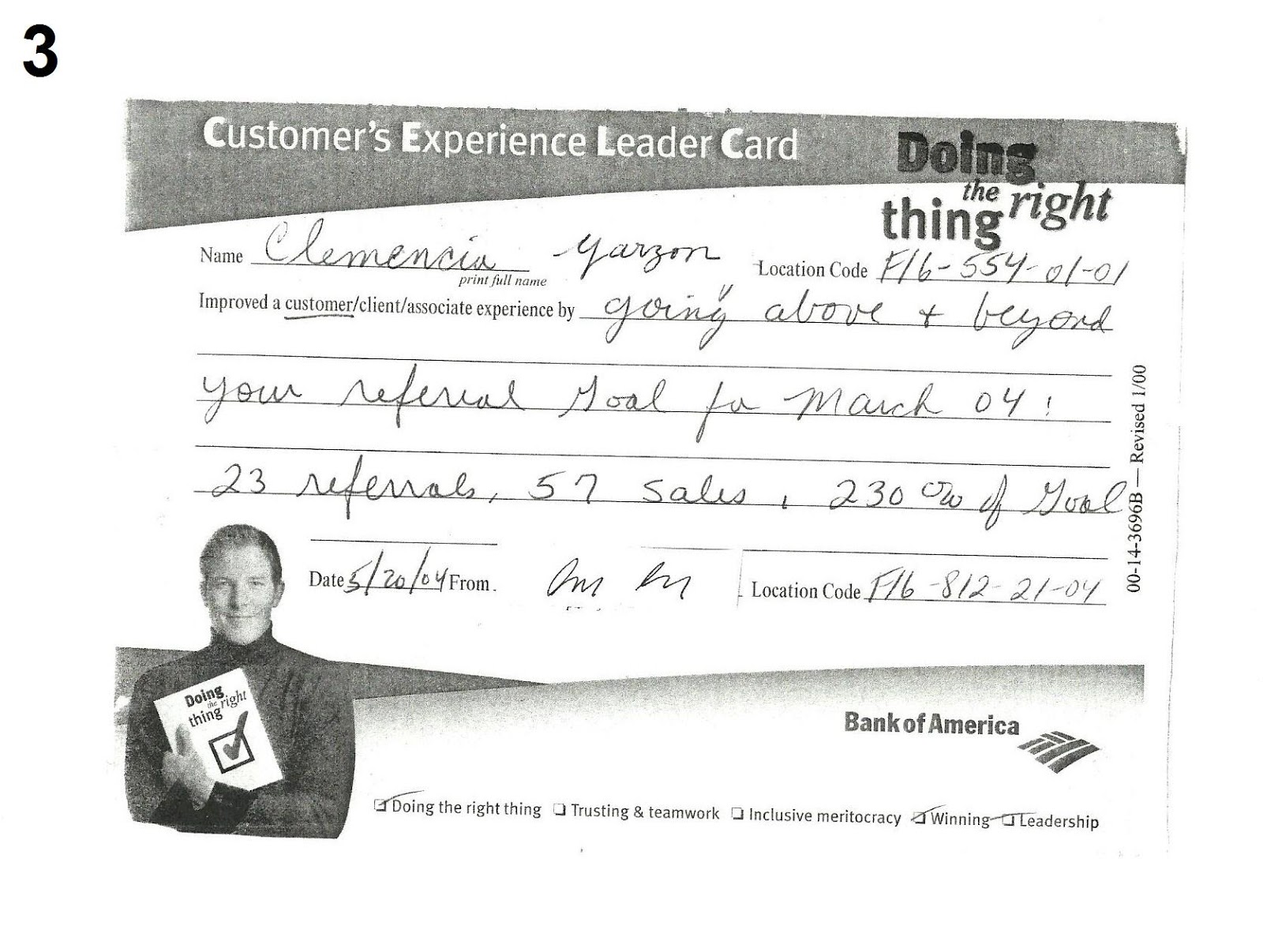 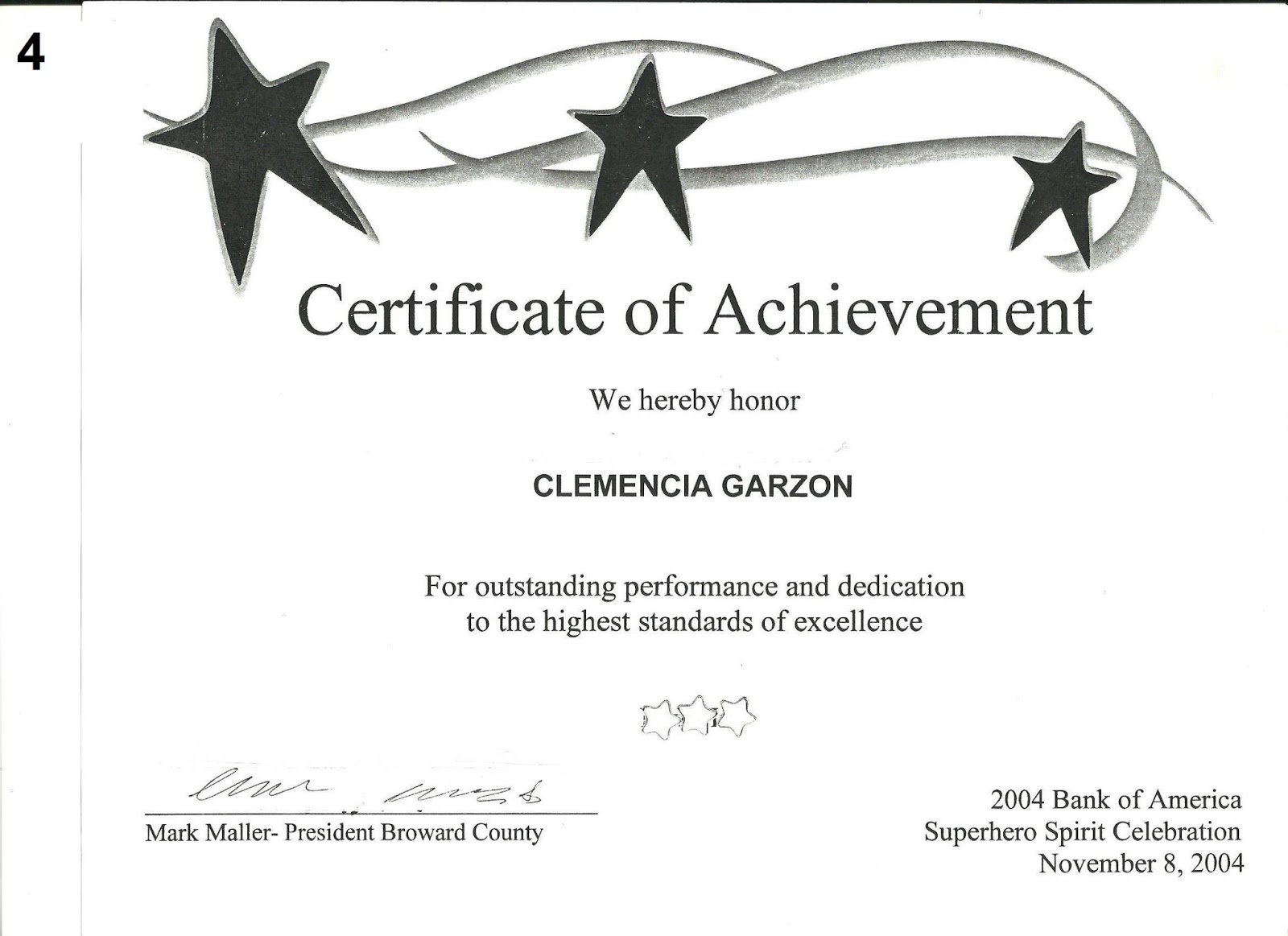 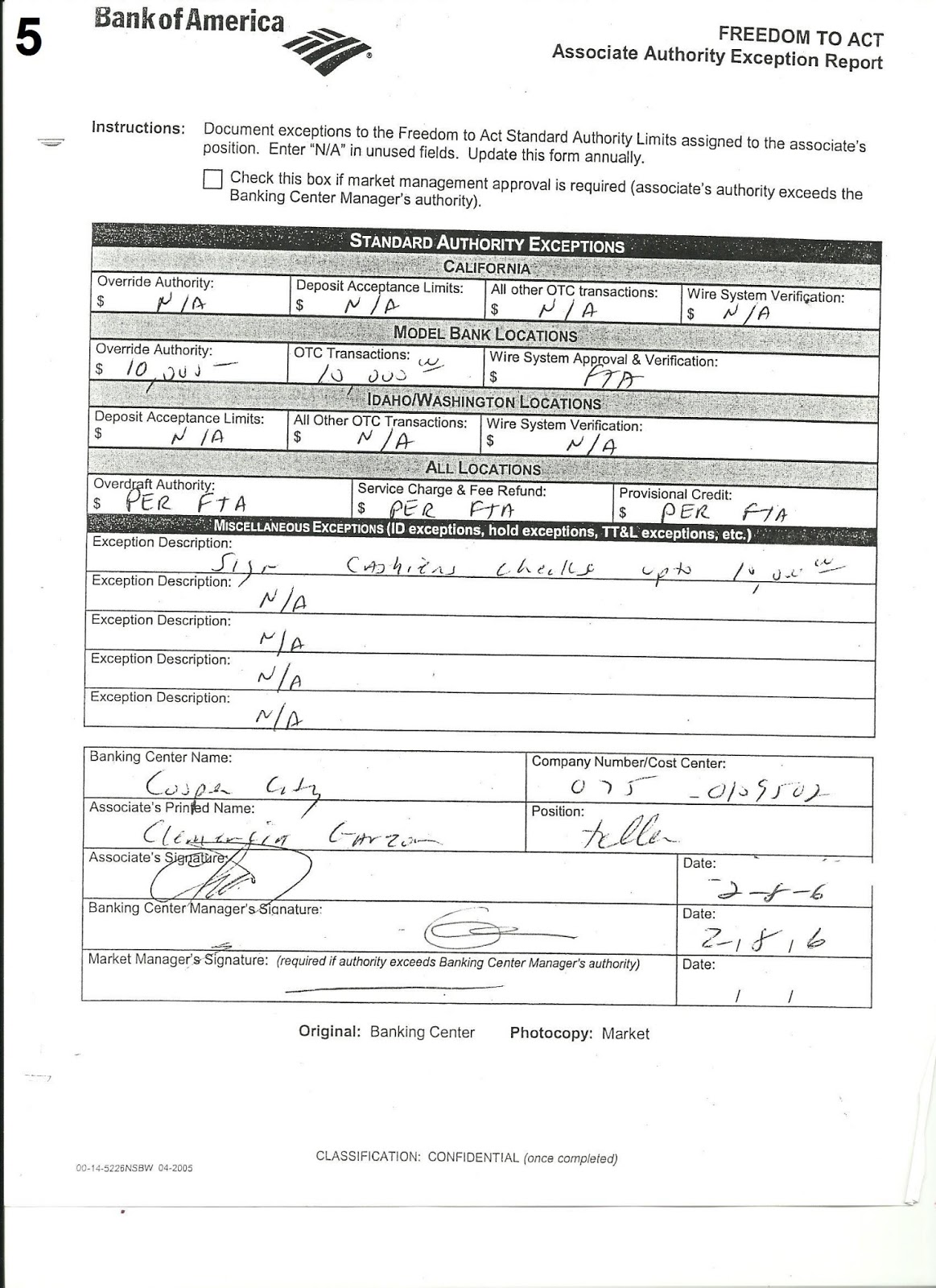 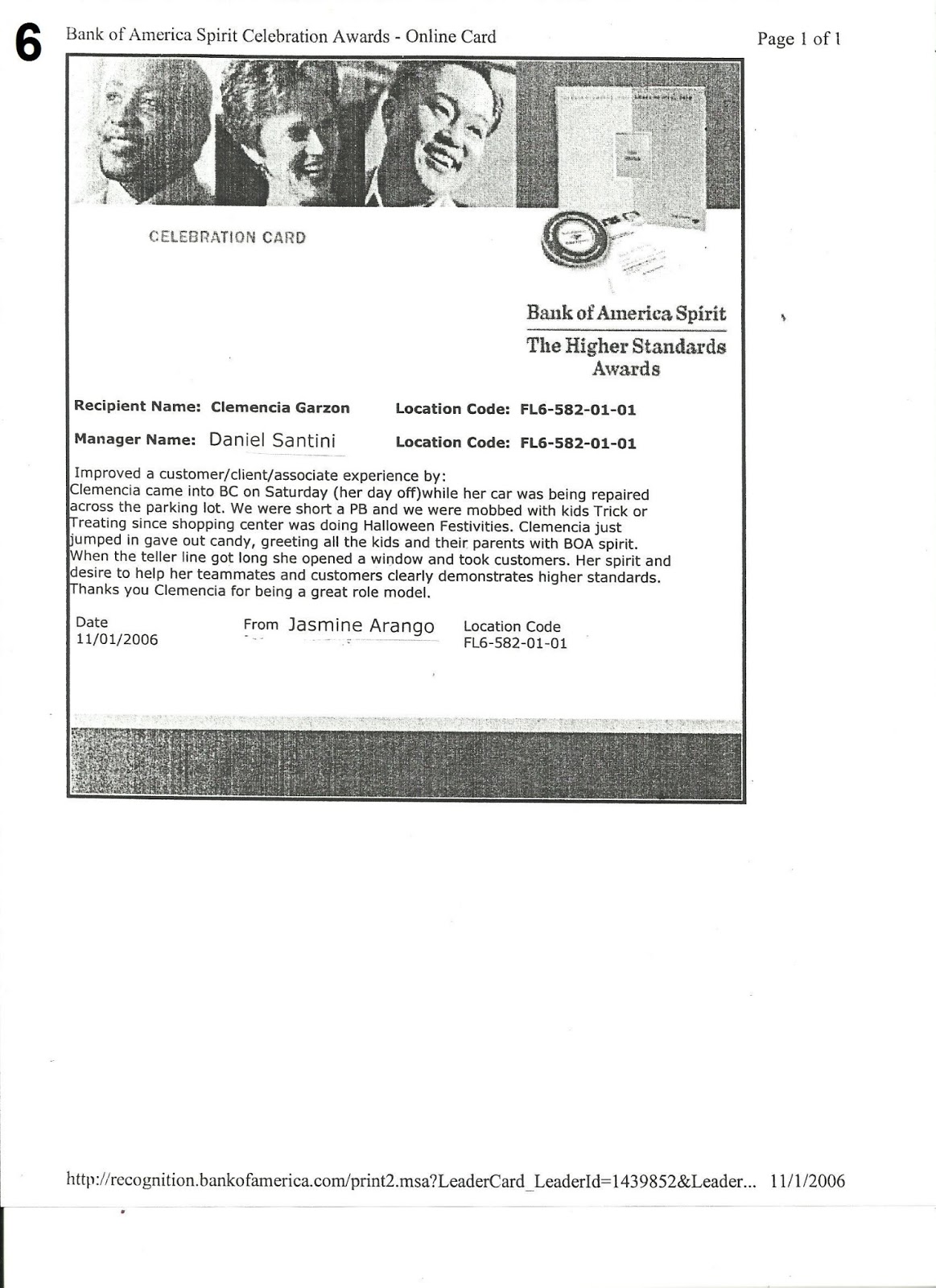 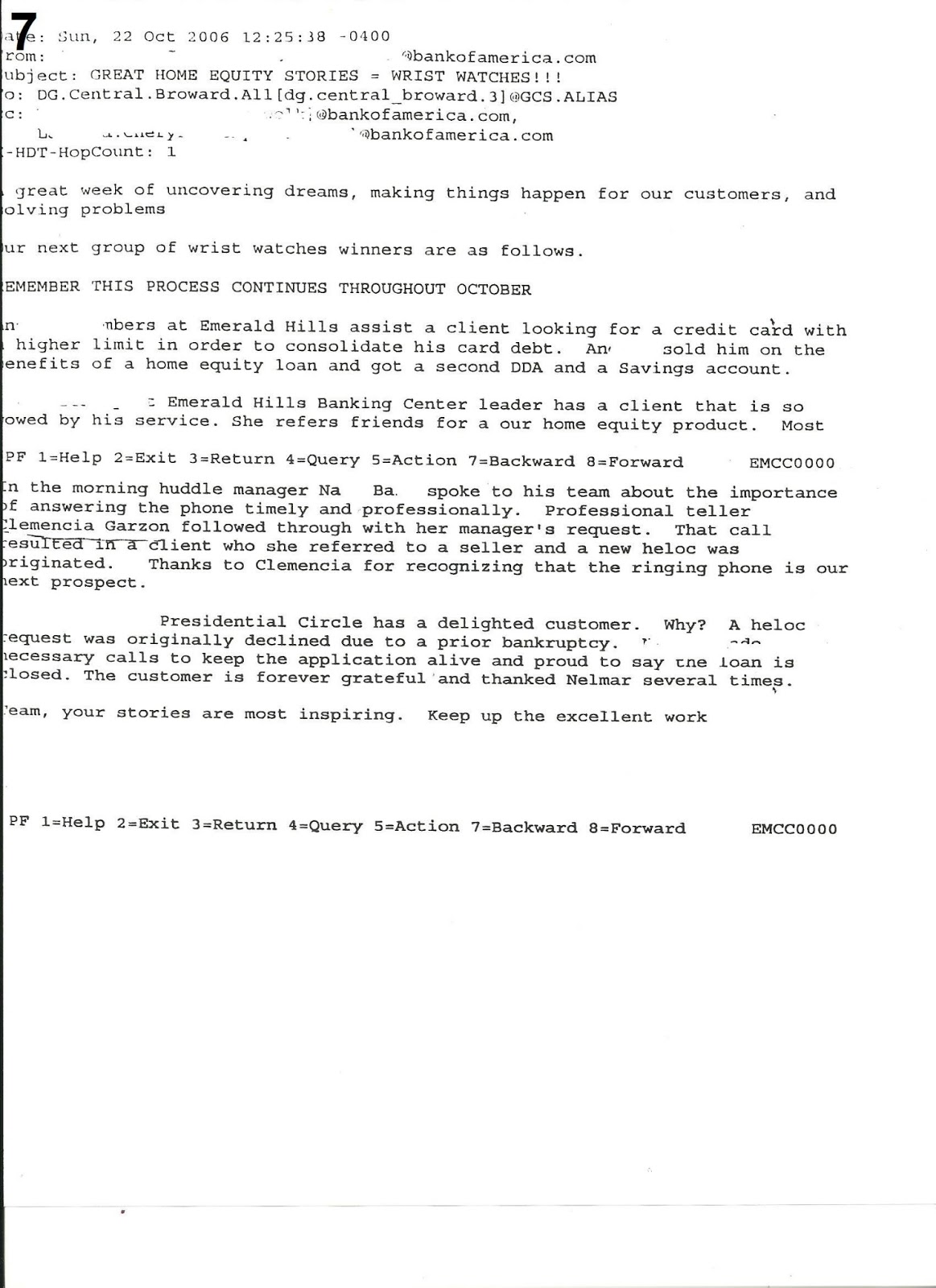 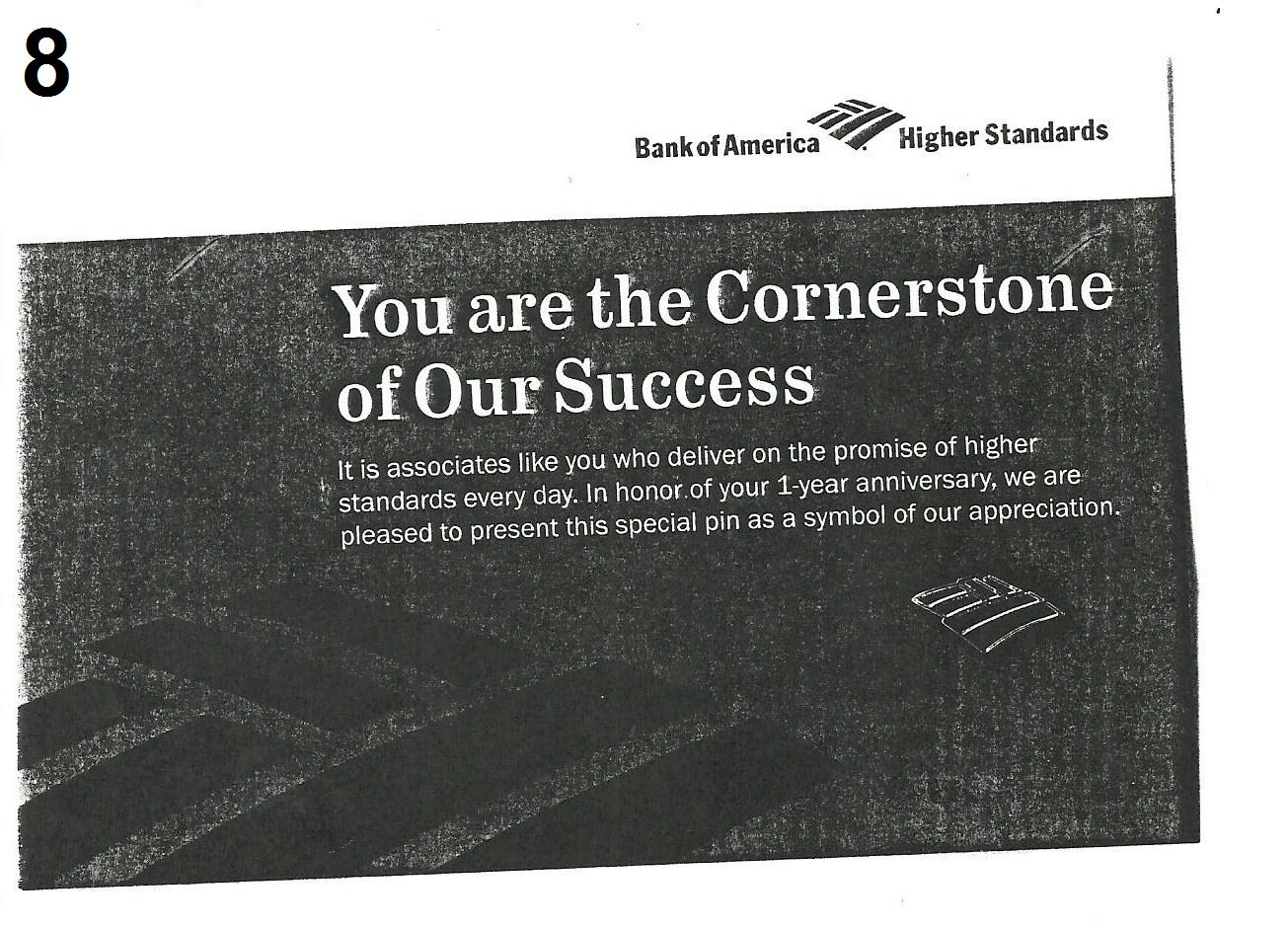 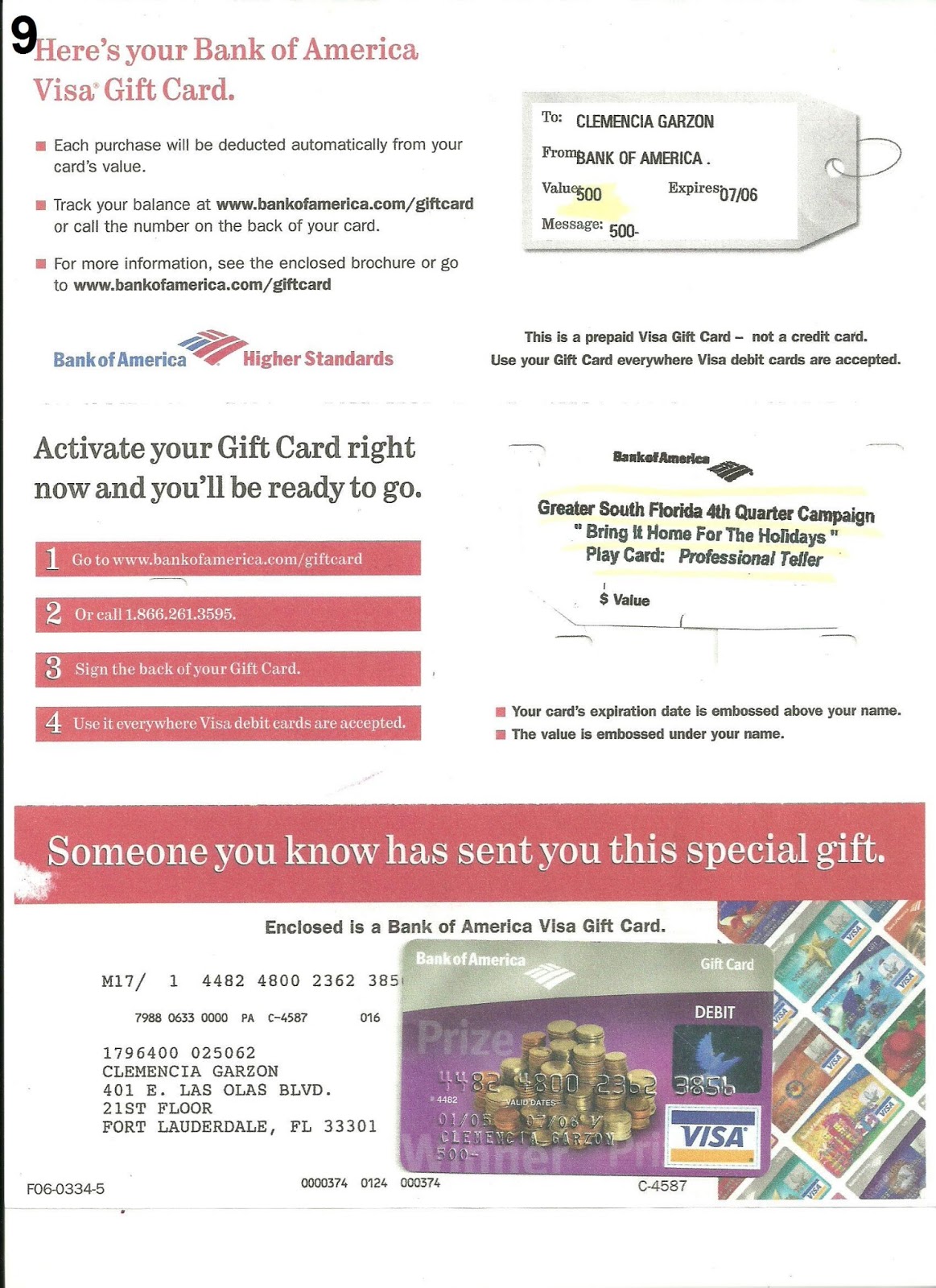 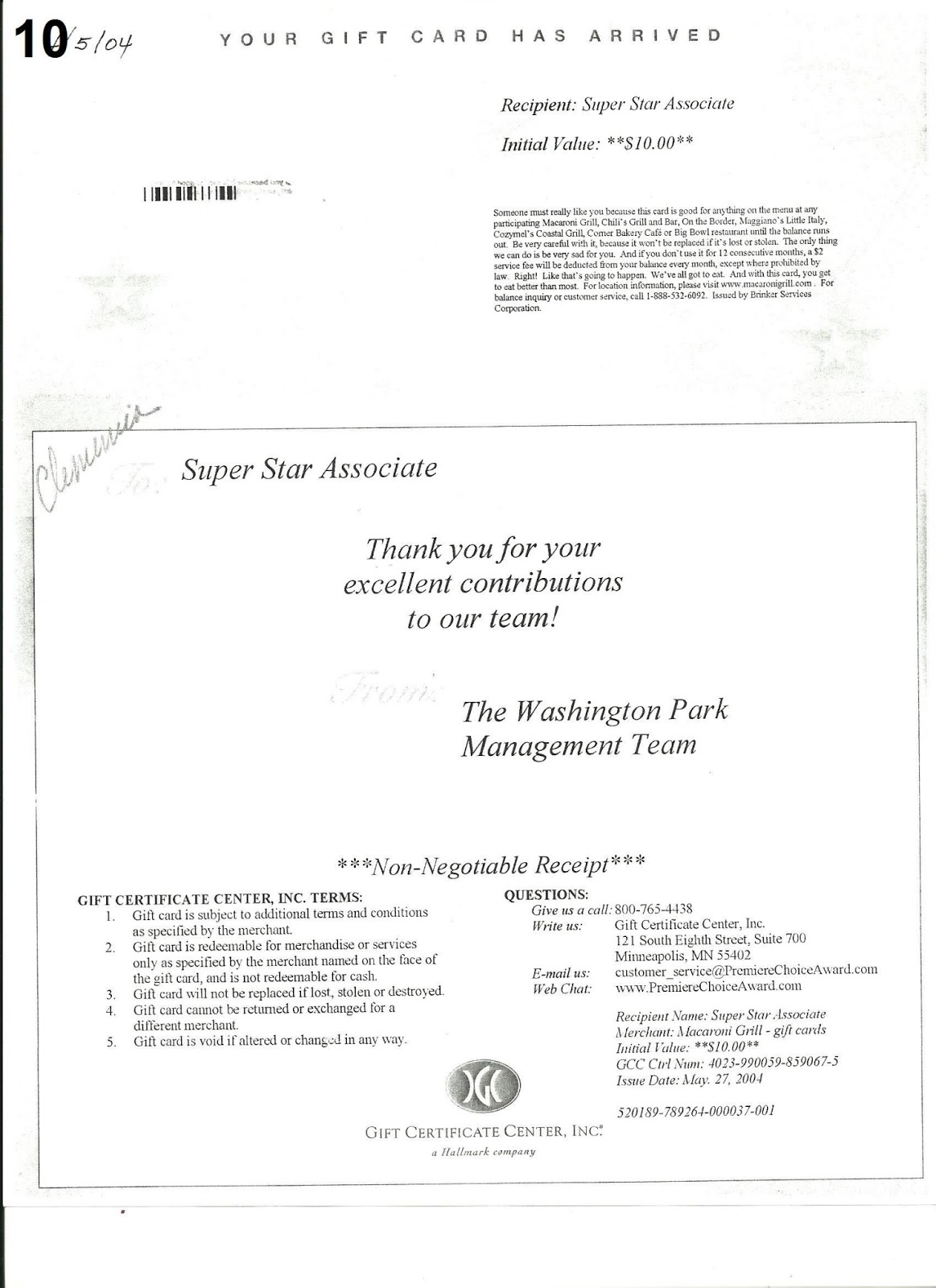 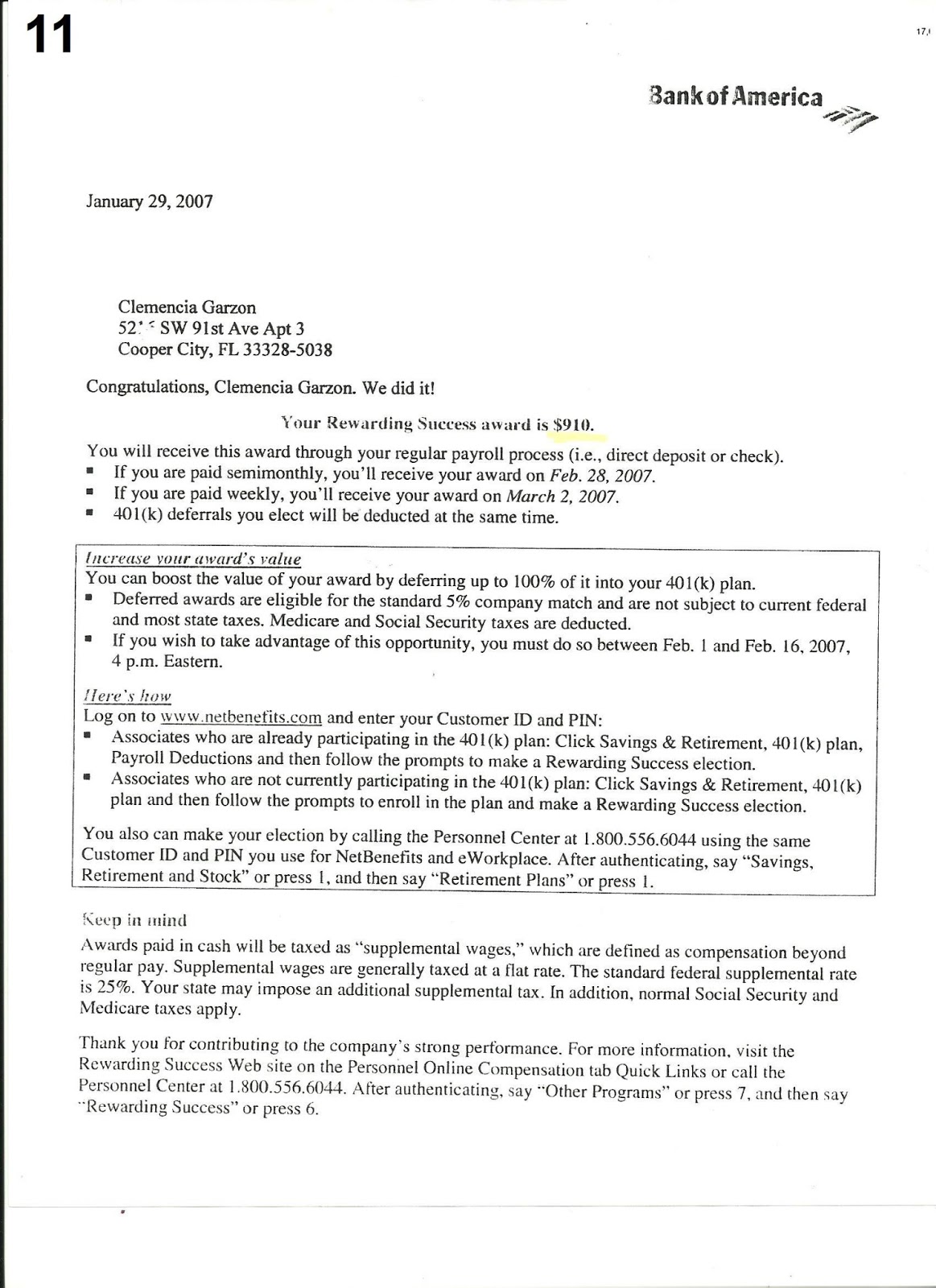 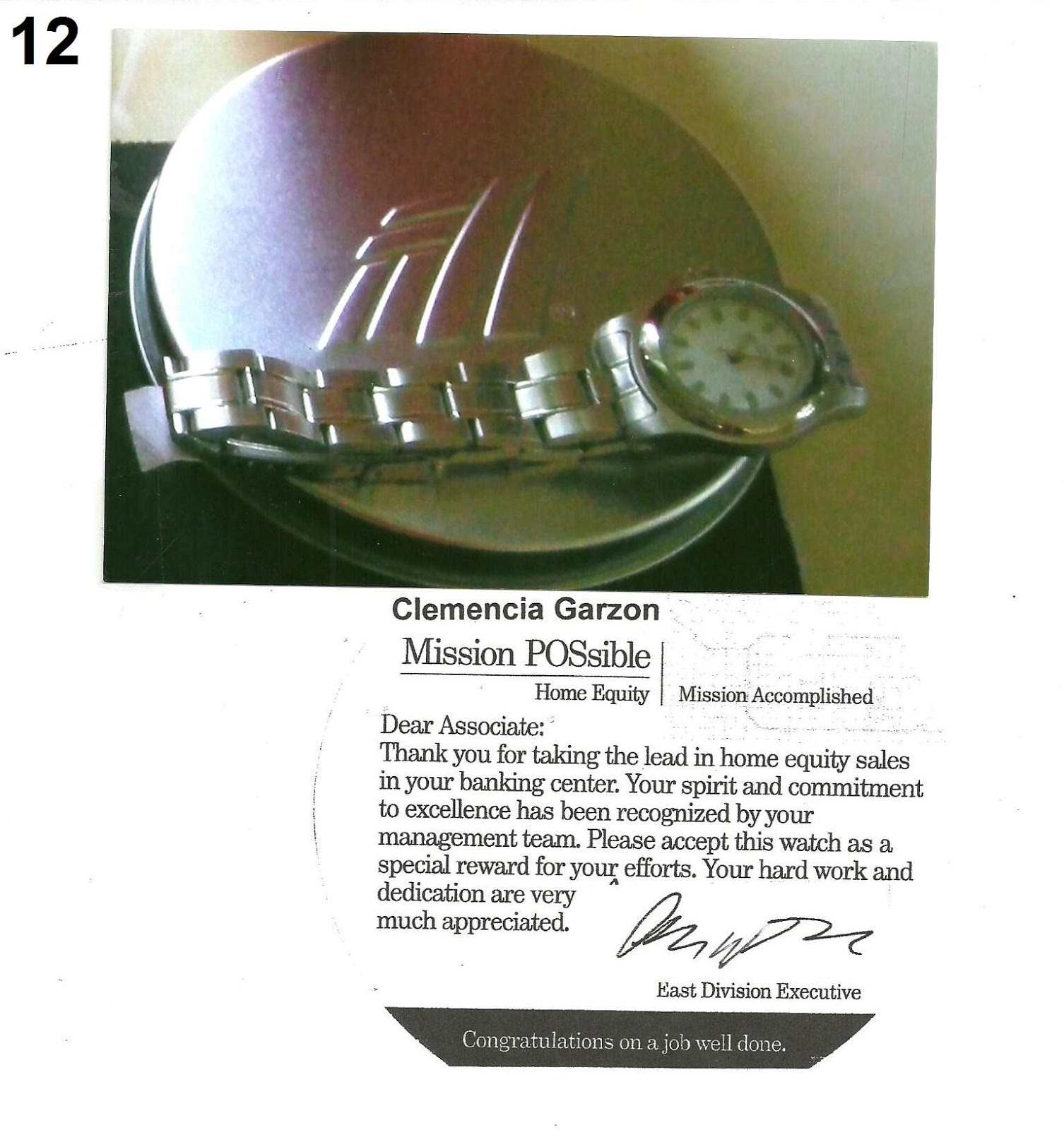 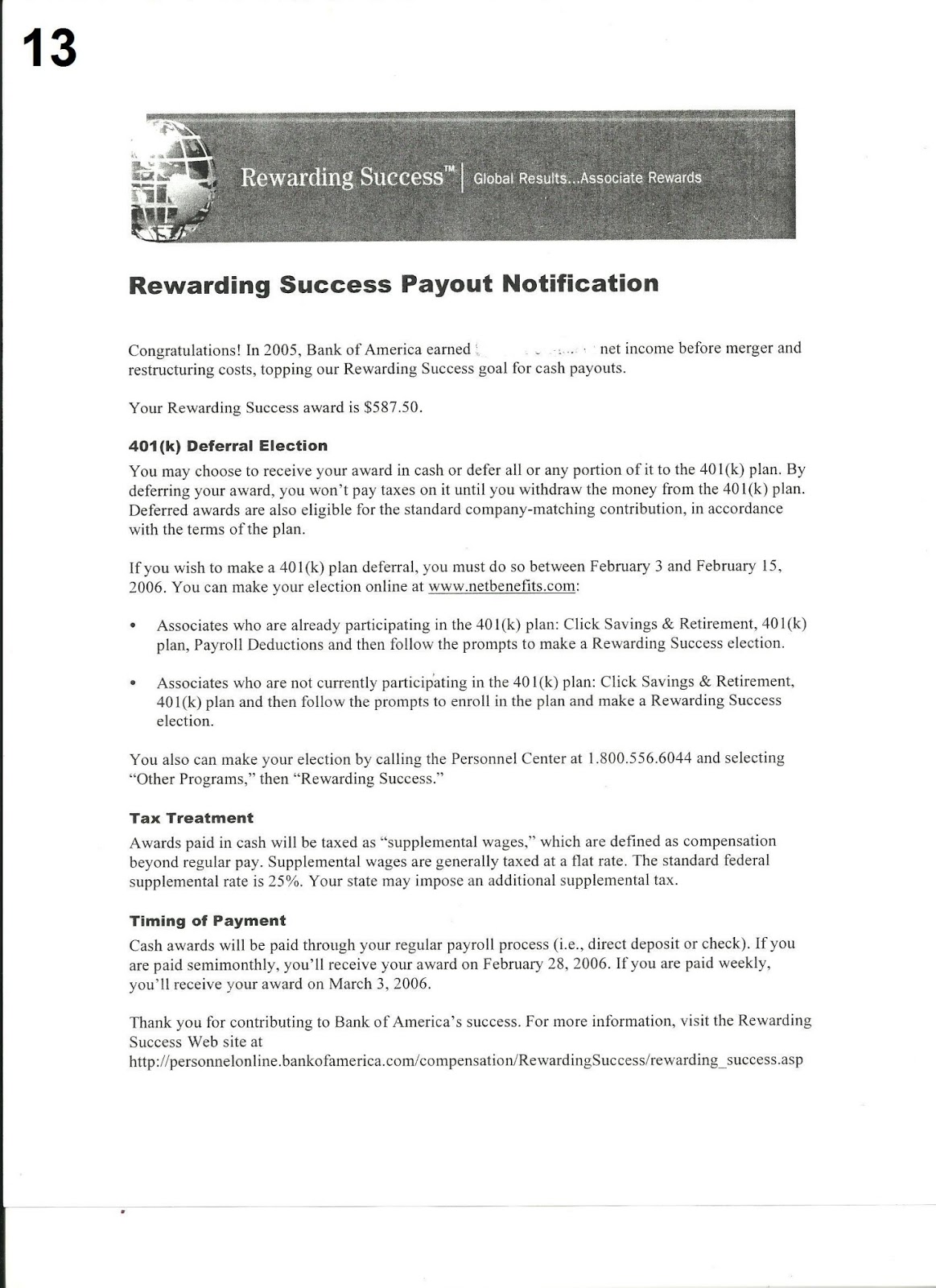 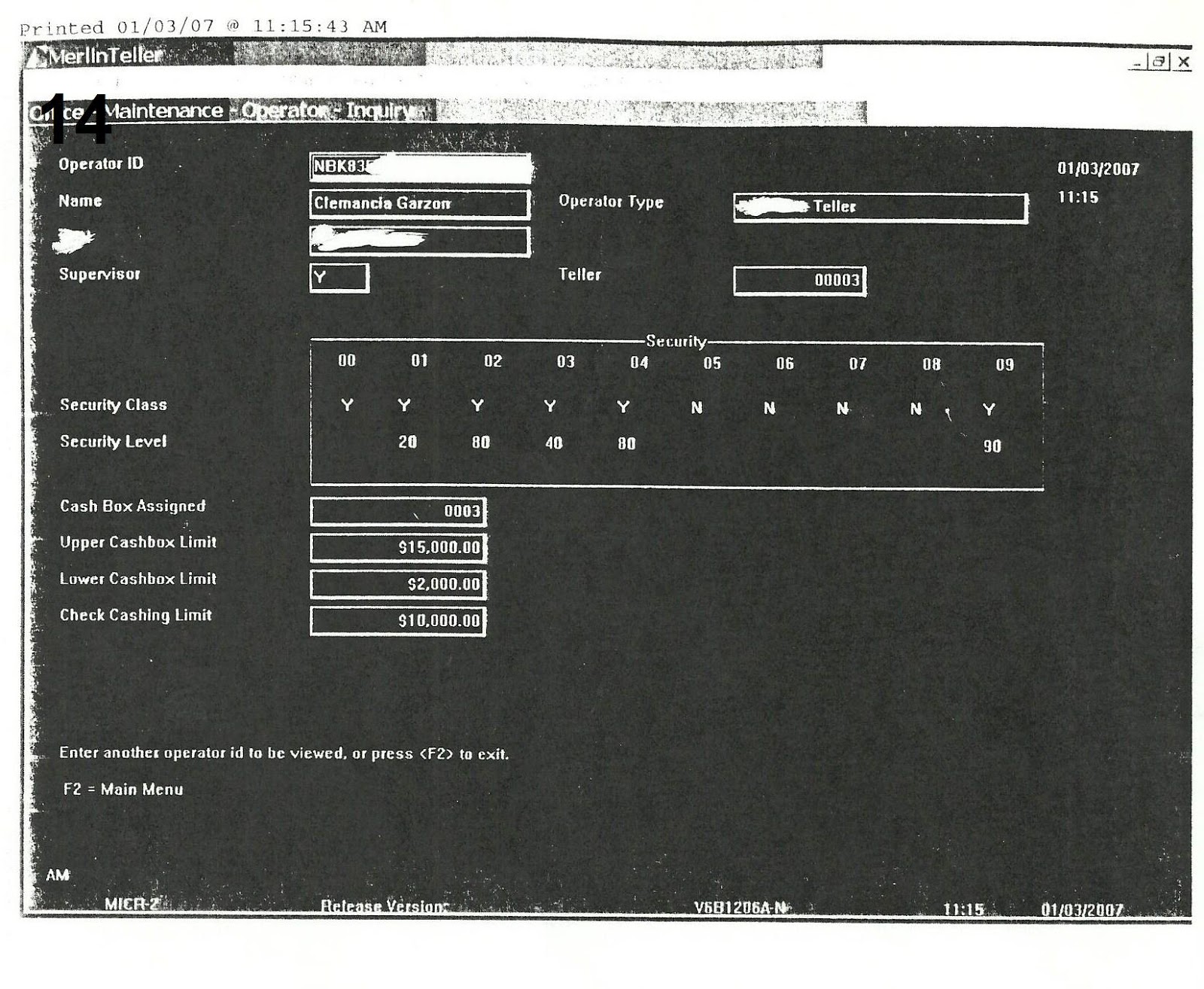 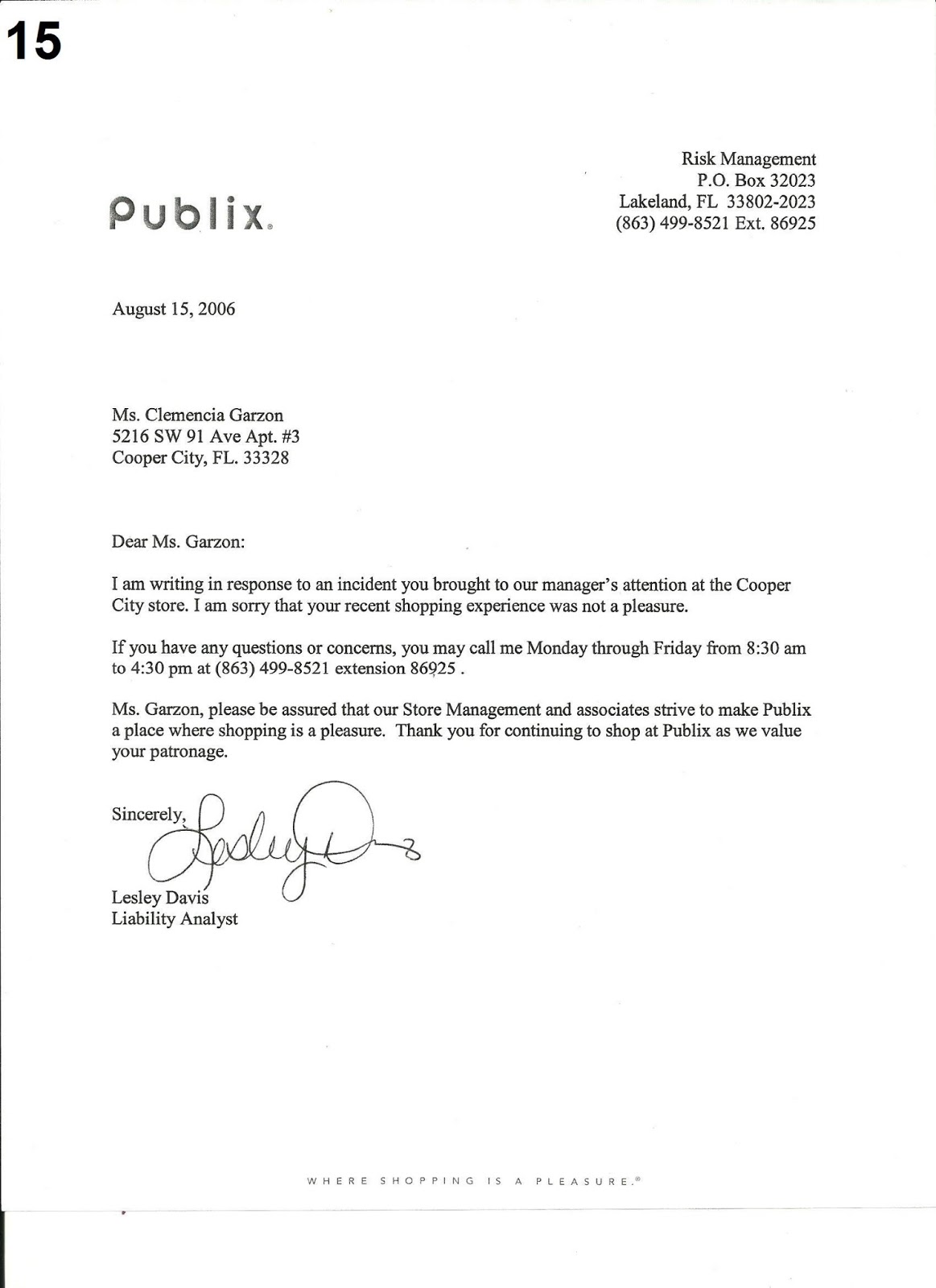 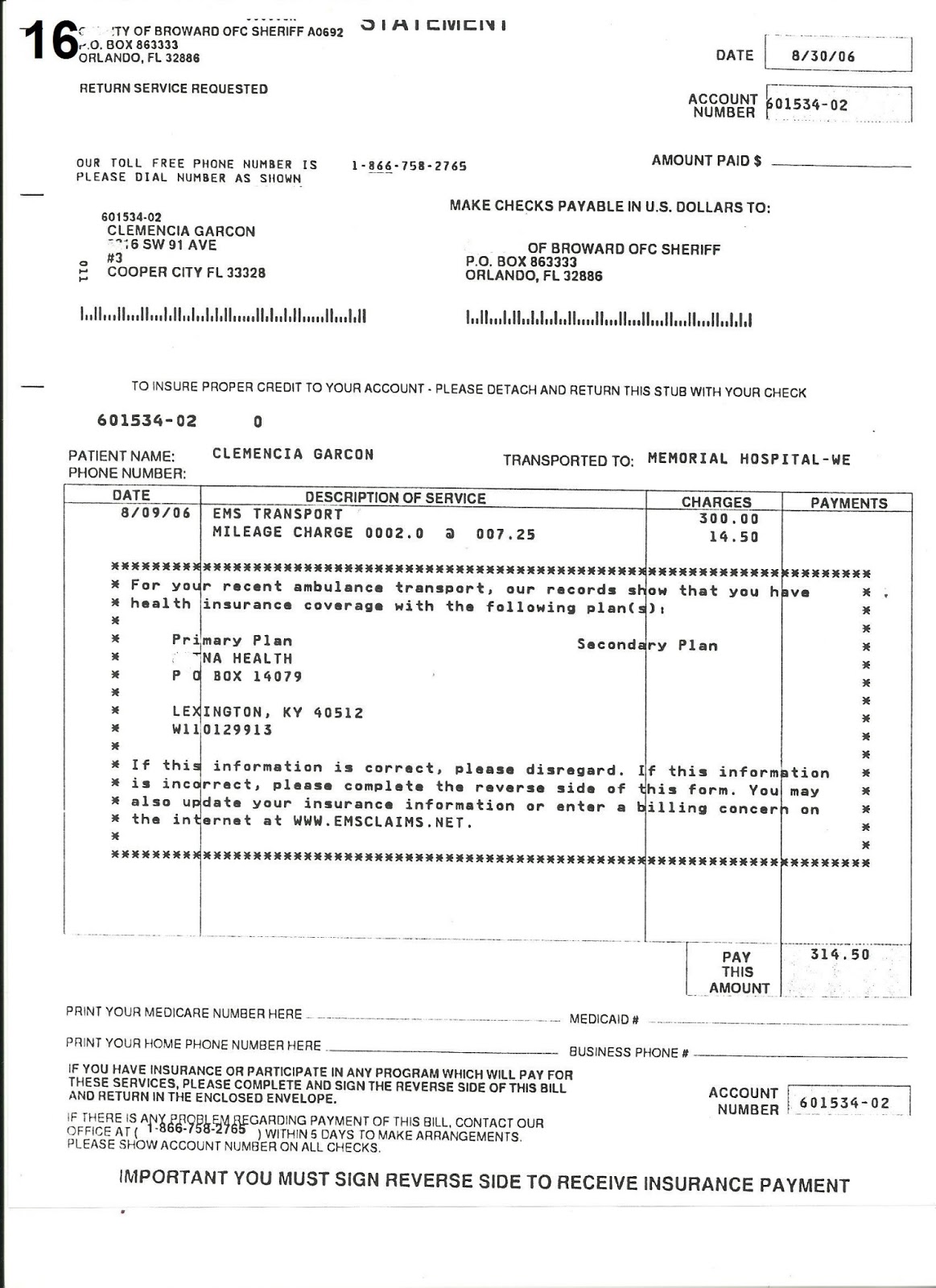 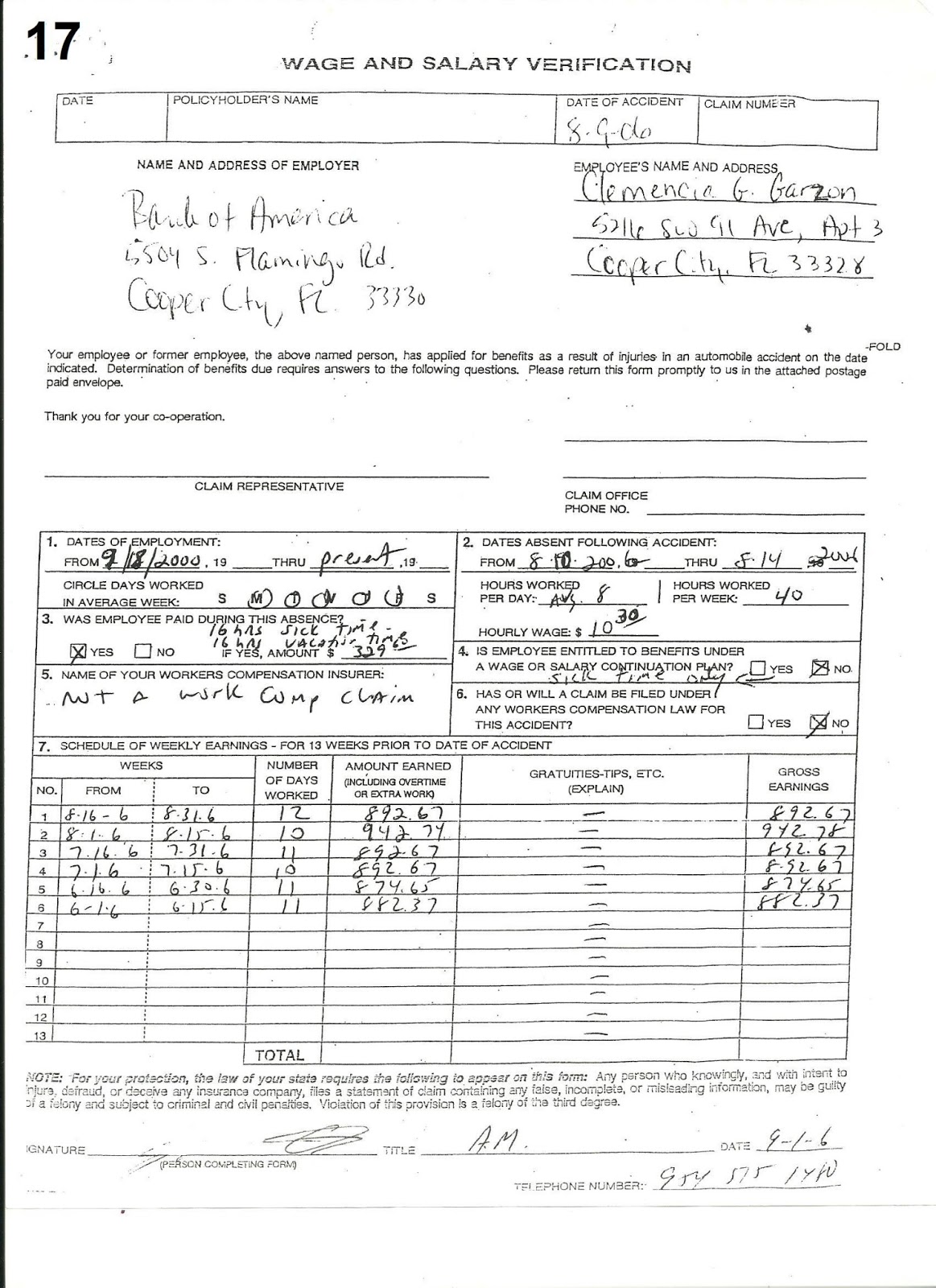 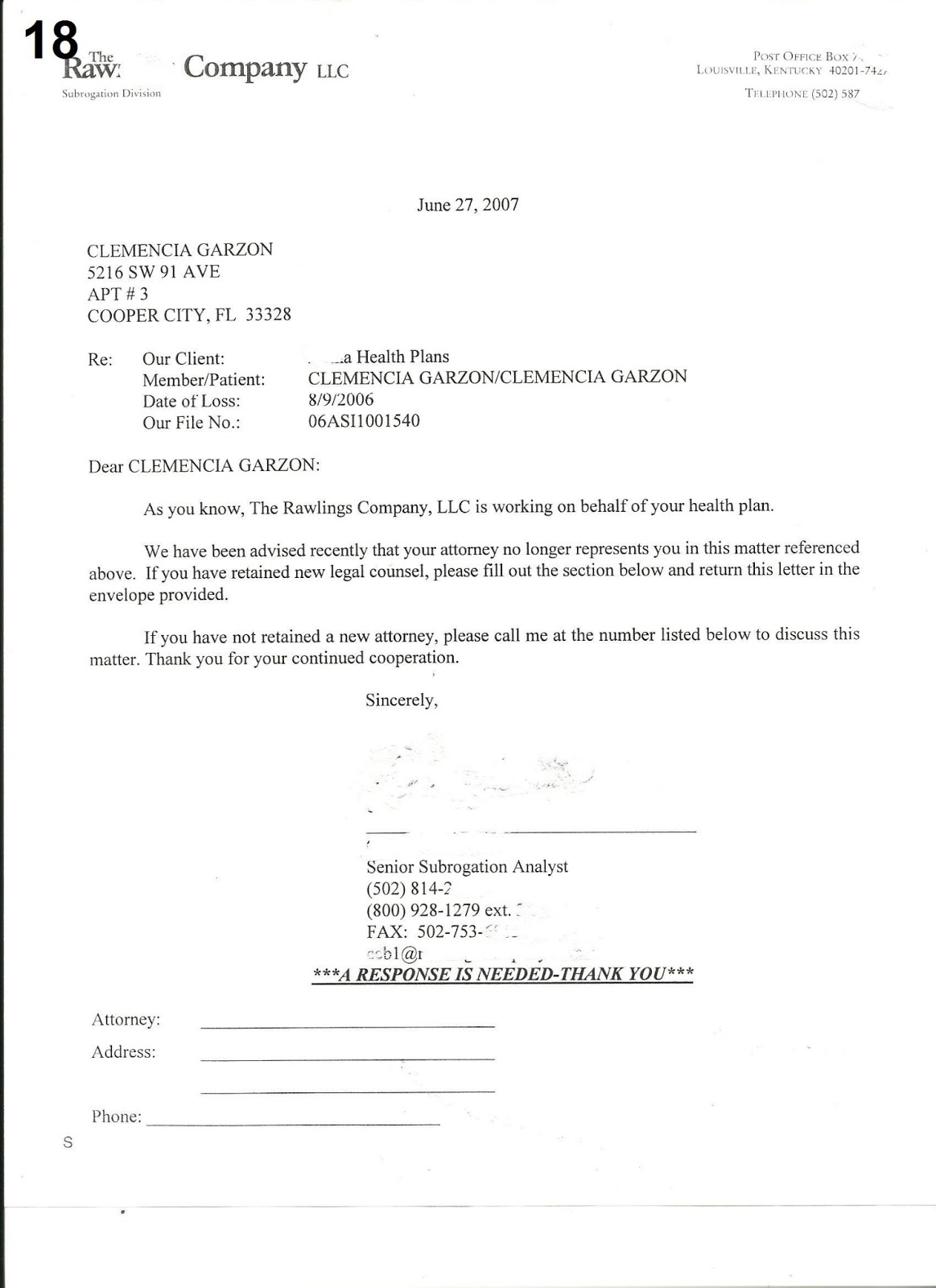 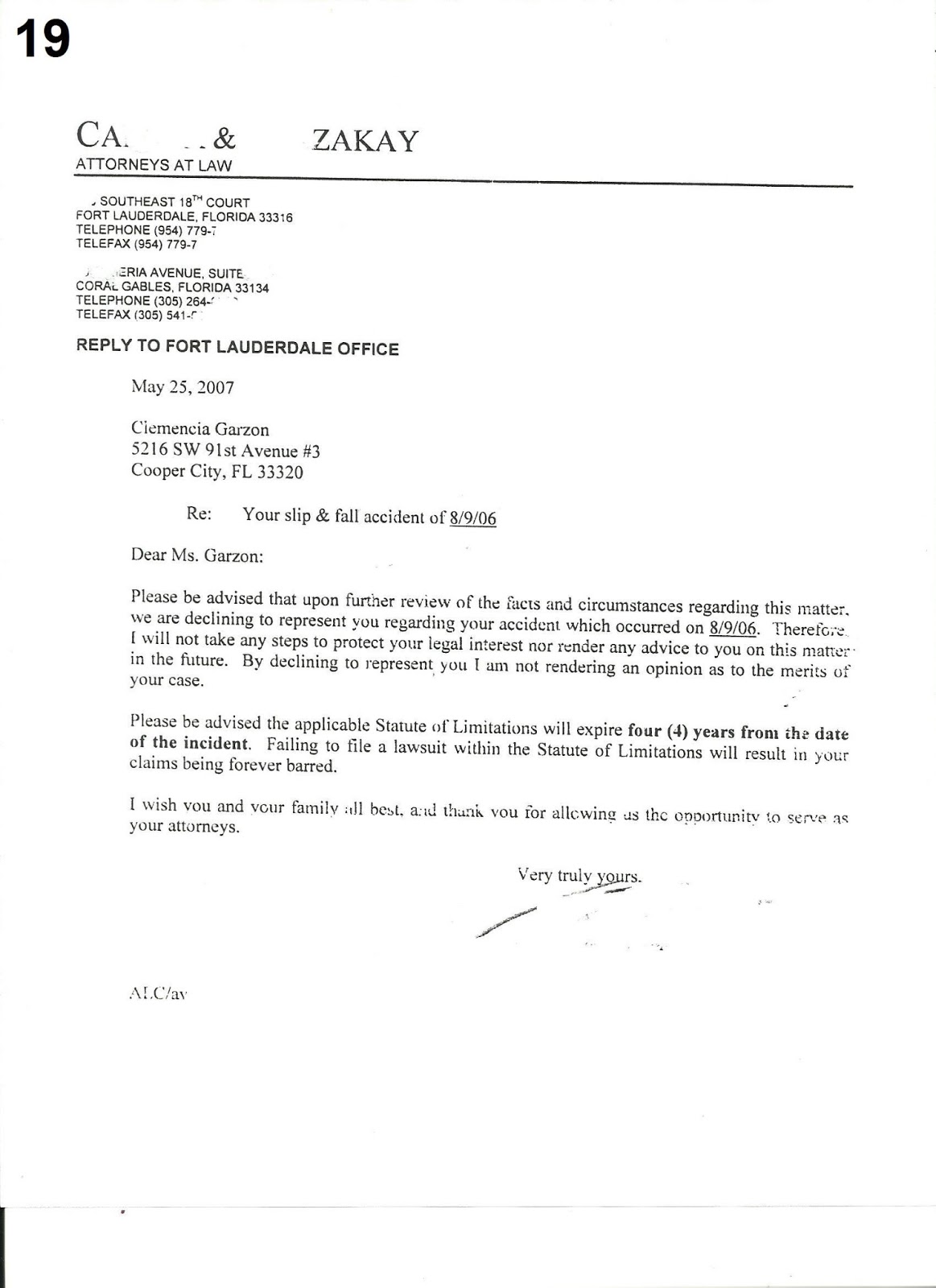 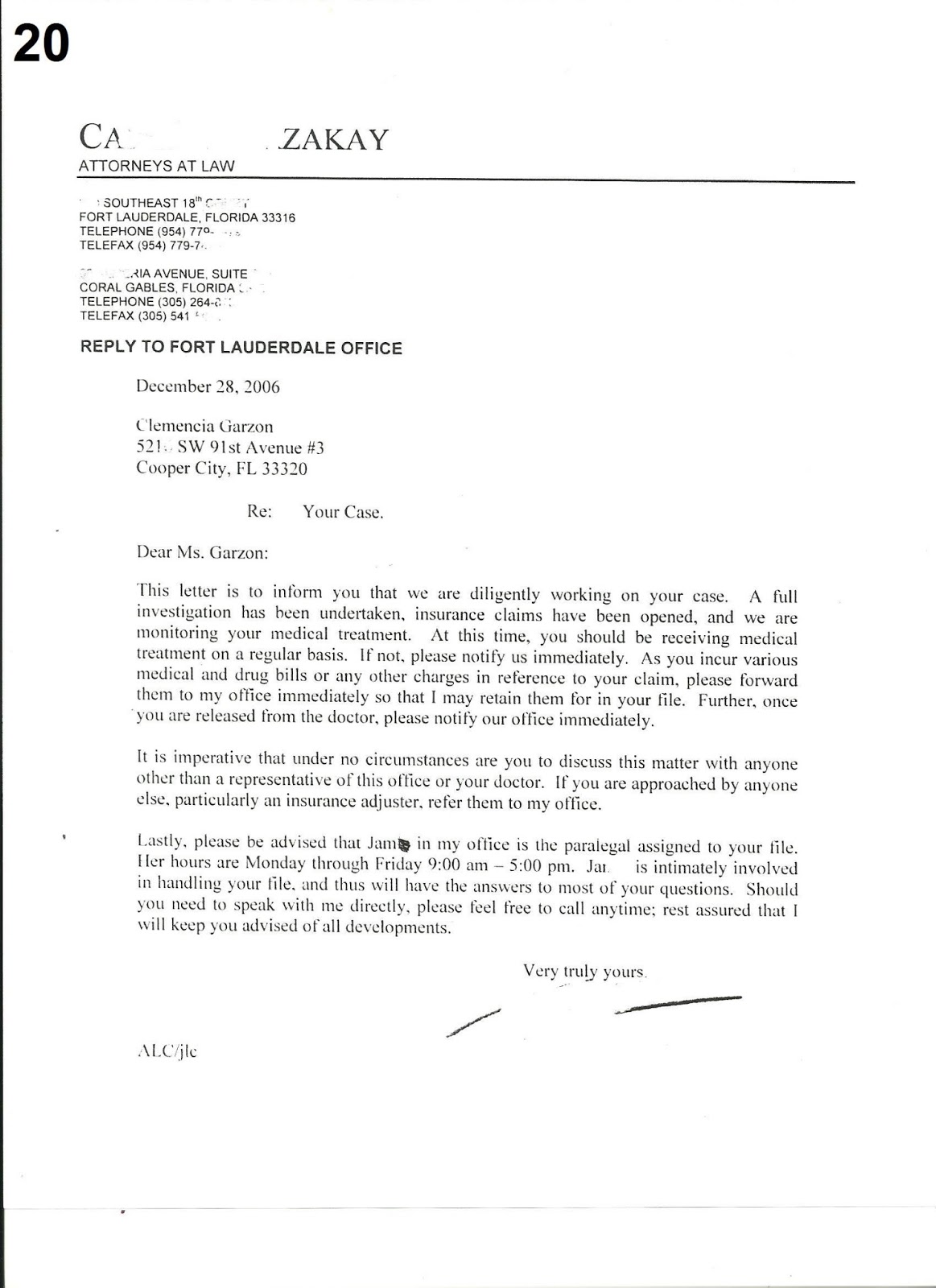 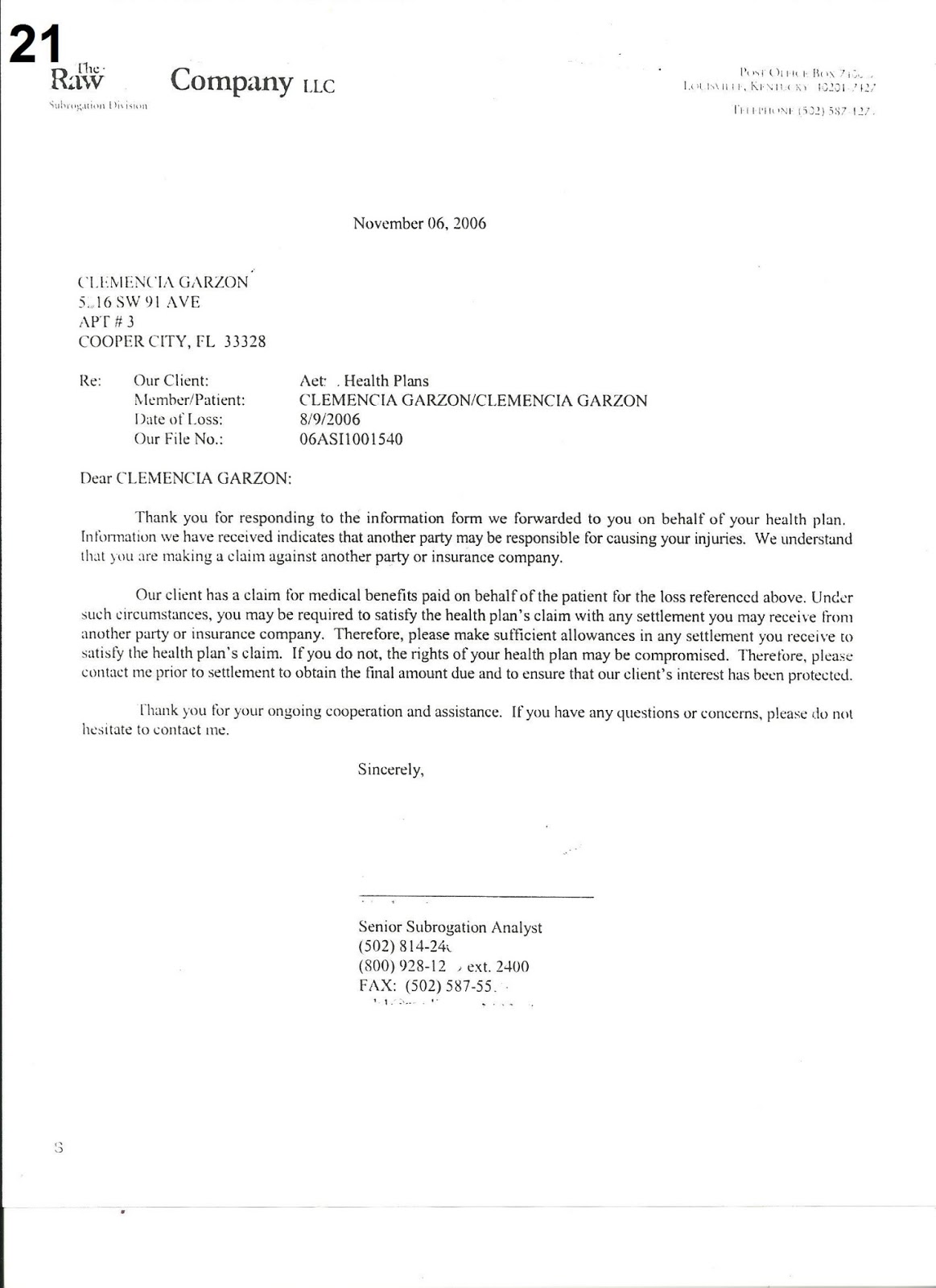 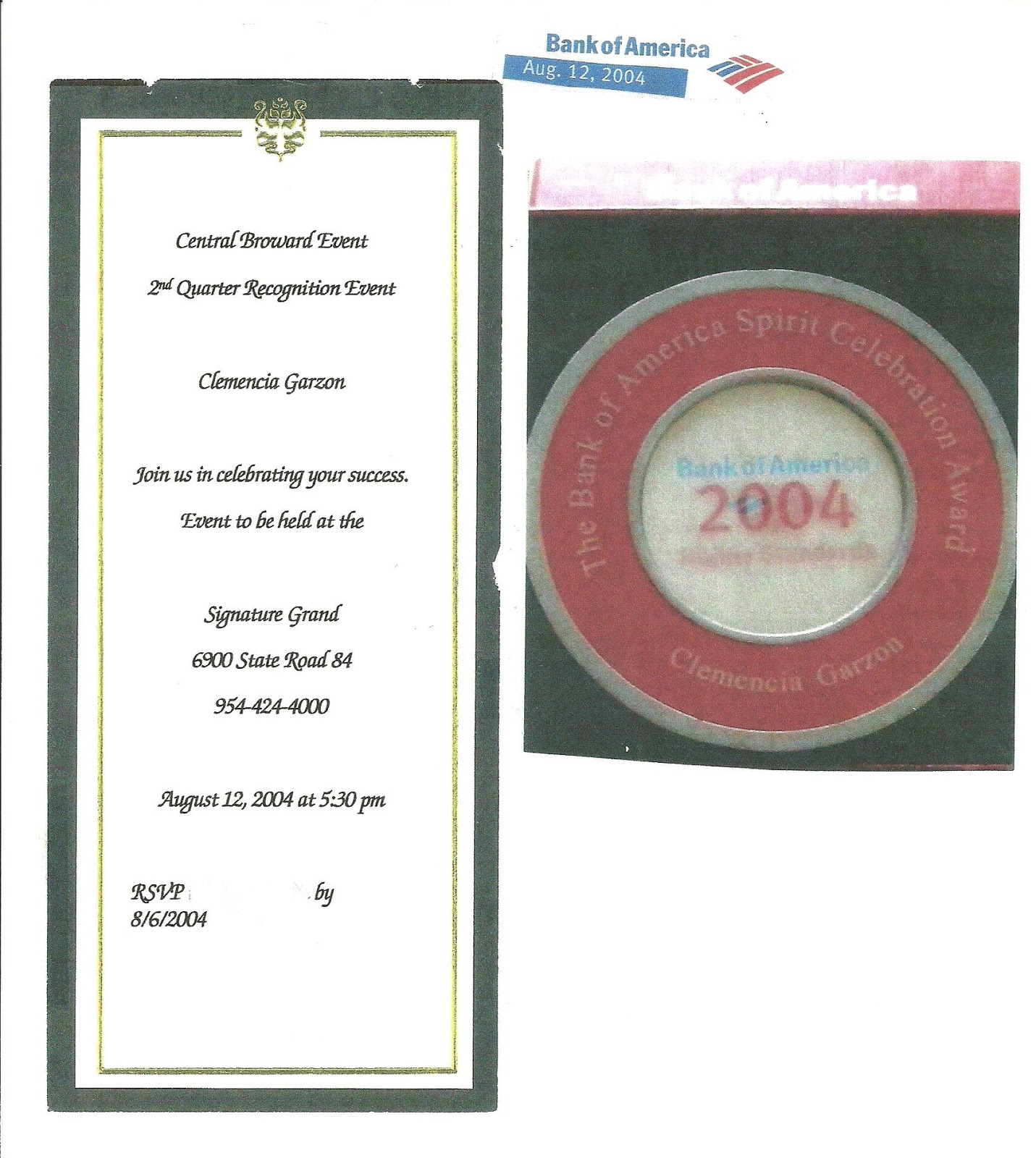 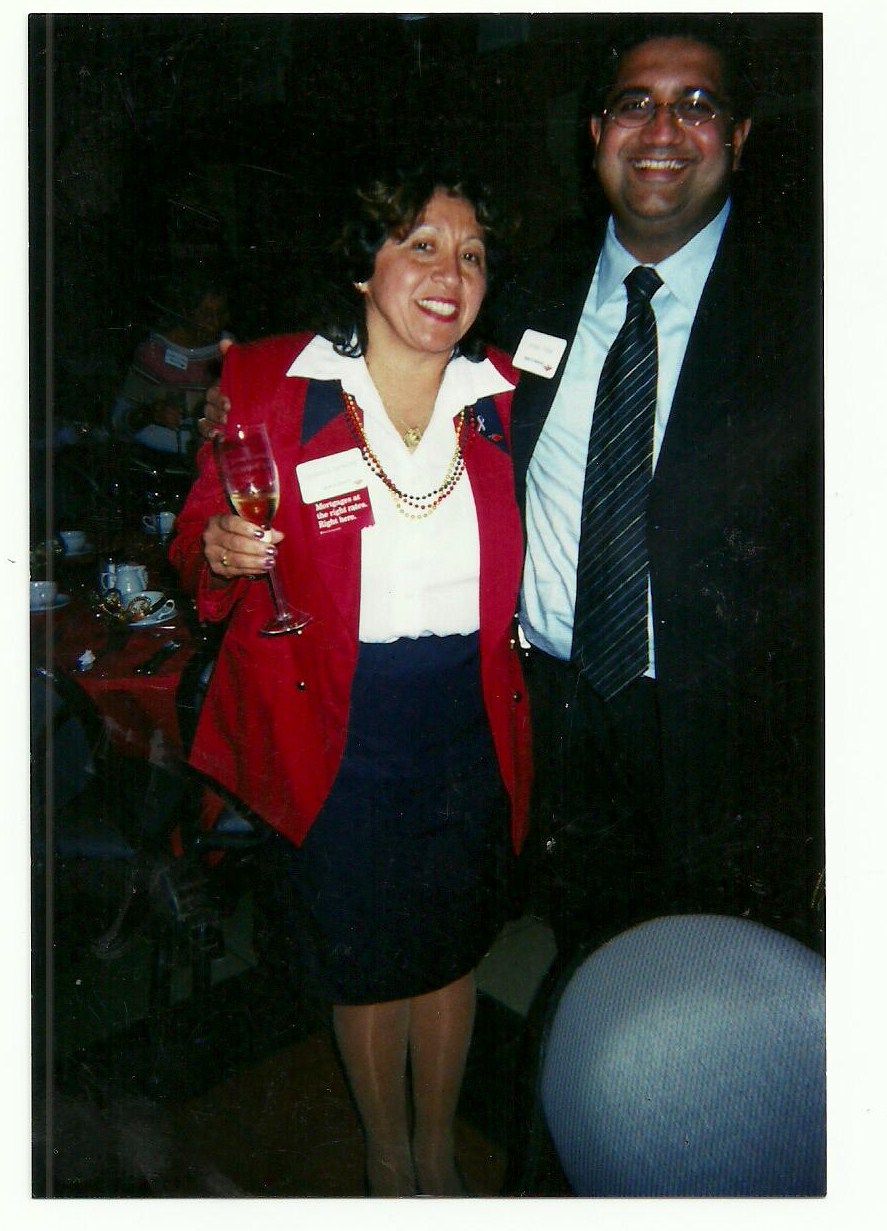 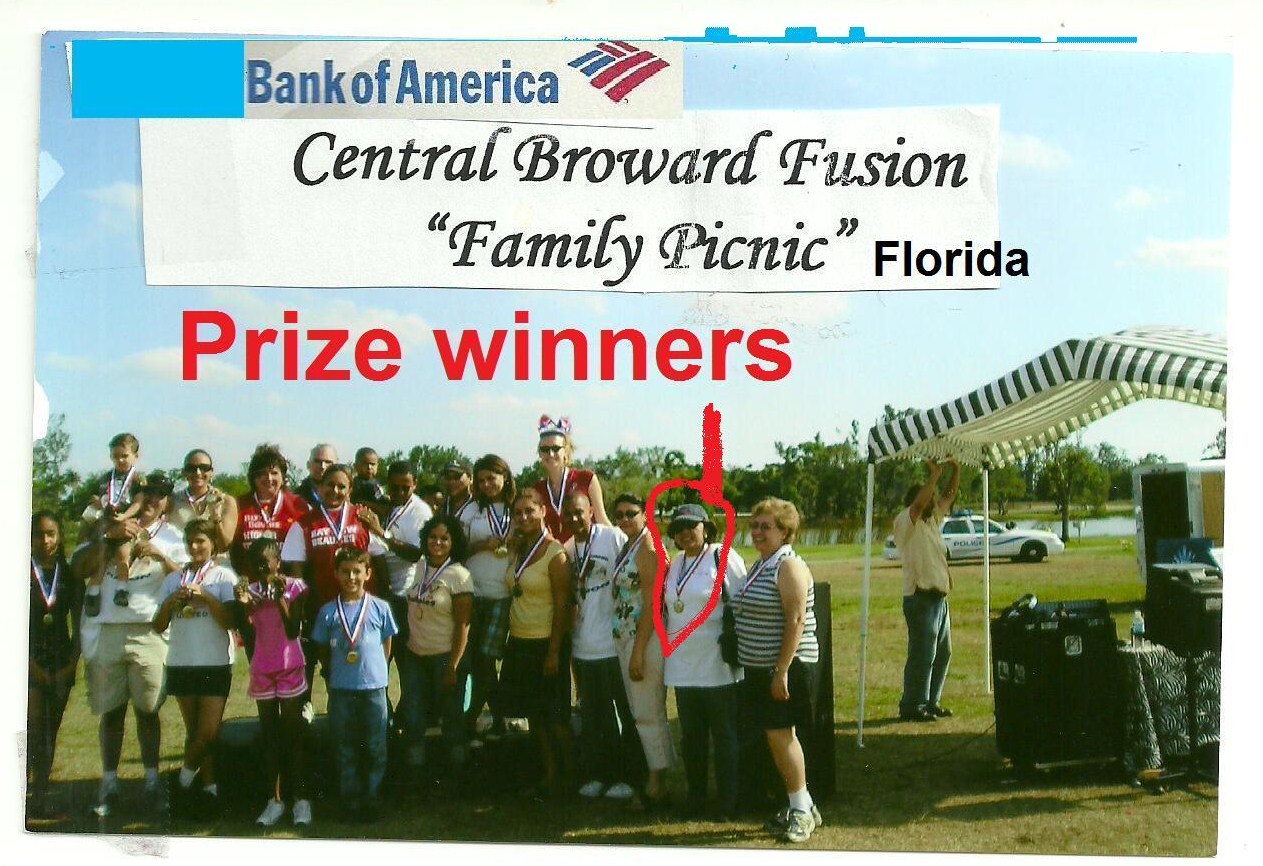 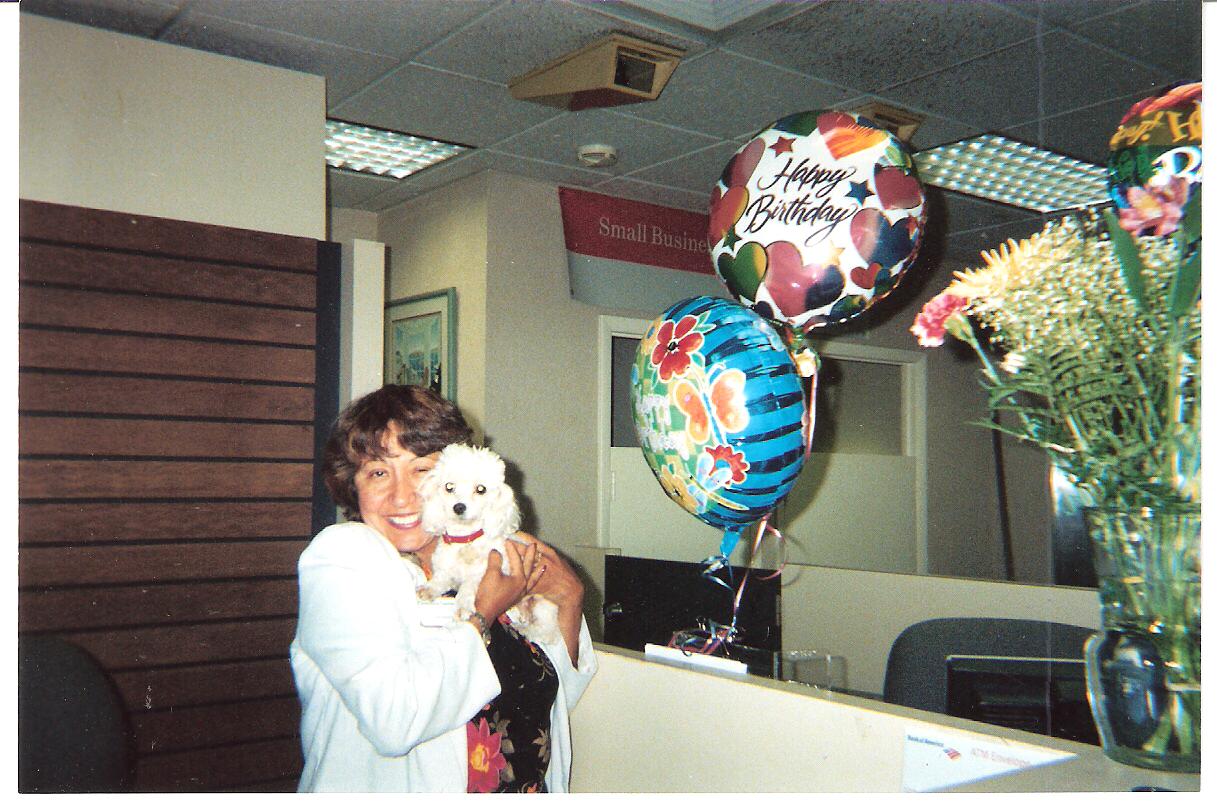 Posted by bankofamericaprotest at 11:12 PM